Legendary for many reasons, Darius Alpha is certainly one of the best known PC Engine titles (albeit being one of the rarest). Darius Alpha never saw a regular retail release, but was instead given away in a raffle for PC Engine users that had purchased both Super Darius (on CD) and Darius Plus (on HuCard) before.

According to the letter NEC included for the lucky winners of said raffle, 9,762 users registered for the contest. Only 800 copies of the game were eventually given away. Both the nature of how the game was distributed back then and the fact that only 800 pcs were given away, make Darius Alpha one the rarest “official” PC Engine games out there. A repro of that letter is of course included with each of our copies of Darius Alpha.

And then there was NEC’s failed venture into 3D territory. In early 1990 NEC hyped the 3D capability of certain PC Engine titles, especially Super Darius. Official docs show that 3D googles had been announced for march of 1990, despite none of them ever showing up at at a retail level. Some got out though and it’s rumored that these were included for the winners of the Darius Alpha raffle as well. NEC simple repurposed Sony’s 3D Handycam glasses – without actually fully understanding or communicating how these work.

The 3D effect used on titles like Super Darius (or Darius Alpha) is called “Pulfrich” effect and it’s based on the fact that our brains take a little while longer to process dimmed images. By darkening one eye only, images to that eye get delayed by what equals approx. one frame of video. One of the best known video games to use that particular effect was “Jim Power: The Lost Dimension in 3D” on SNES. Unfortunately the effect depends on what’s actually in your focus area. For Darius this means that during regular stages you need to darken your left eye, while for bosses you have to darken your right eye. Good thing that Alpha only consists of boss fights ;) So, even it’s just a gag and nothing more than a curiosity, we include two pairs of 3D glasses with every copy of Darius Alpha. One especially for Darius Alpha and the other one for titles like Super Darius on PCE, Darius on Mega Drive or Jim Power on SNES.

Further included with our copies of Darius Alpha are a promotional flyer (explaining how to participate in the Darius Alpha raffle in 1990), two postcards and three stickers, the “Darius Origin Story” as a comic (both in Japanese and English) and a collectable Darius Alpha enamel pin (only as stock lasts of course). Also included is a japanese manual (Darius Alpha originally did not include a manual) and a set of alternative cover inlays.

With Darius Alpha we present the first of our new HuCard titles. Of course Darius Alpha includes both an injection molded HuCard and an injection molded HuCard case. The cases resemble the original japanese cases from the 80s and 90s with a “spine sticker” around the left edge side. Cases carry our logo on the inside. HuCards are designed to insert and eject smoothly from your original systems. The edge inserted into the system is smoothly rounded and the print on the back will remind you of your classic japanese HuCards (see attached gallery for more pictures).

Darius Alpha is now available for PRE-ORDER. The set is expected to ship at the end of january. We need the pre-order phase to determine demand and we might not be able to fulfill all orders by late january. Although a second batch is planned for march, please make sure to get in your pre-order as soon as possible. Payments are expected 7-10 days before the actual shipping date.

By default our HuCards are region locked to japanese systems. We can configure your HuCard for American TG16 or Turbo Duo setups instead, but keep in mind that Darius Alpha is a hybrid PC Engine & Super Grafx game, so getting it configured for US setups basically discards its Super Grafx compatibility.

This includes the 32mbit “definitive” version of Darius on a japanese Mega Drive cartridge (the game has no region lock, but the cart is made to fit japanese systems or after market systems like the Analogue SG). The cart is accompanied by a case, japanese insert, japanese manual and a reg card. Only a few dozen of these are available, so please make sure to get your pre-order in early, if you like to add the Mega Drive version of Darius to your order. It’s certainly a great collectable! 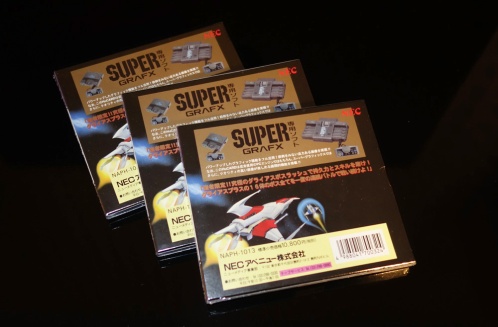 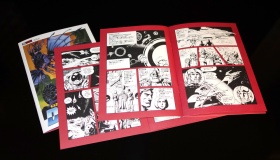 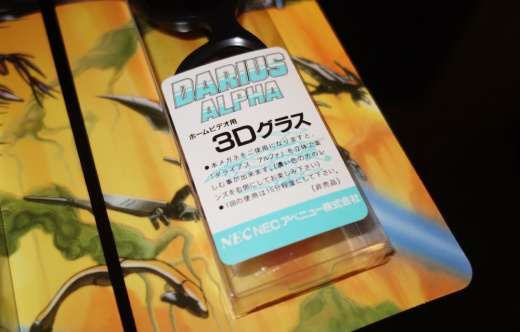 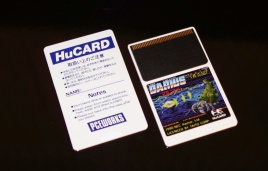 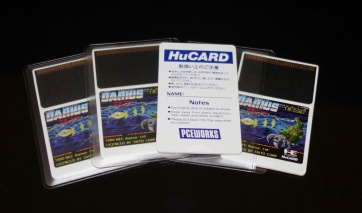