While shoot’em up fans had some good times with our last boxset, let’s not forget that the PC Engine had a tremendous line up of really great titles of all varieties available. With our PUZZLE AND ACTION set, we focus on four great and unique titles, that shouldn’t be missing from any collection.

Included are Pop’n Magic, which combines Snow Bros with Bubble Bobble in terms of gameplay and offers cute sprite artwork (and if you ever played Nightmare in the Dark on the Neo Geo you’re already familiar with Pop’n Magic’s gameplay mechanics).

The TV Show borrows heavily from Bomberman while adding destructable floors and a great variety of very different characters and tons of voice acting. Motteke Tamago is part of the same genre, but combines it with frantic gameplay and players literally battling each other (on screen). The title was available as a pack-in disc to one of the later PC Engine Fan magazines and saw a Saturn re-release a few years down the road.

And our personal favorite is Bazaru de Gozaru (no game de gozaru). A little known puzzle masterpiece from the very end of the PC Engine era, in which you command a monkey on its way through dozens of stages by giving action commands (like jump or run) ahead of time and seeing how they play out (which they very often do very differently from what you expected). While the game is in Japanese, it’s very easily playable once you get into it (and to help with that we included an English starter guide). One of the very best!

The set can be ordered now and will start shipping on March 8th.

Early orders will include one of our collector’s coins. This is the last opportunity to get one of the Star Parodier coins. All orders still include a copy of Dungeon Master (Theron’s Quest) for free. 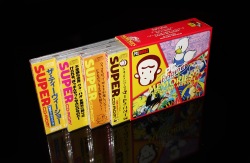